An Adoption Story: The Rowleys

If you were to see my family in a restaurant or out watching our kids play sports, it would be obvious to you that we are an adoptive family.

And for some reason, because we are obviously a bit unique, people feel they they are allowed to ask questions about our family makeup or offer comments—not all of which I particularly want to answer or hear when I am out trying to maneuver around with six children!

Sometimes these questions feel a bit intrusive, and cross the line between polite inquiry and mind-your-own-damn-business.

“Are they really brothers and sisters?” or “How much did they cost?”

But the first thing that people often want to know is this: why did we choose to grow our family through adoption when we already had kids? 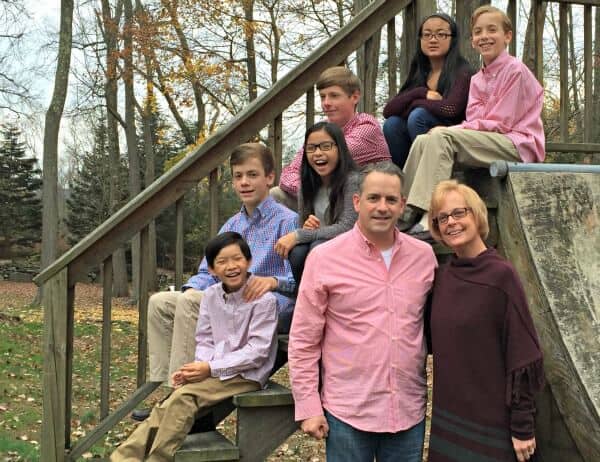 Generally speaking, I think that people adopt children for all kinds of reasons, just as people choose to become pregnant and have babies for all kinds of reasons. Some people are led to adoption by the way of infertility, and others because adoption had already touched their lives in some other way—perhaps they or a sibling were adopted. I’ve read about other families who became interested in adoption through work they were doing via their church.

For me and my husband Steve, having children through adoption was just always something that was part of our discussion about having a family—way back when we were just dating in our early 30s.

That tug of starting a family clearly existed inside both of our hearts, and we knew that if we ever intended to have children, we had better get started or our ages would eventually make the decision for us. And so we decided to try to get pregnant first, and if that didn’t “work out” then we would start to explore adoption.

First our son Kyle was born, and we loved everything about being parents: the middle of the night feedings, the diaper changings, the lack of sleep, and endless laundry—all of it. And we knew we wanted more children, and we wanted them to be close in age so they could grow up together as friends and playmates (well, hopefully). So seven months after Kyle was born, we were pregnant with Spencer.

Having two babies just really felt like double the wonder and double the excitement to us. It didn’t make us feel over-worked or stressed; it made us feel blessed. So 16 months after Spencer’s birth, Jack was born. Now we had three children under three years of age! And again what we mostly felt was awe and wonder.

Not to say that we weren’t extremely busy—we were!—but we really relished the joy of being a family. And at the risk of sounding too self-confident, we were pretty good at this parenting thing!

Steve and I would explain to other people, “Once you move from having two kids to having three kids, at least one parent is always ‘juggling’ multiple children. And once you’ve got that whole thing figured out, it isn’t hard to imagine going from three kids to four.”

When we thought about having a fourth child, we knew in our hearts that this child would join our family through adoption. It felt right, in the same way that people know that they want to “have” a baby—it’s how they feel, they know they are ready, they just know it.

And for us, there was a bit more. We knew we wanted to parent a child who might not otherwise have an opportunity to be in a family. We also knew we were totally okay with that child being from another race and culture than the one we were born into.

Knowing all of that led us to another “truth” for us. If we were going to adopt one child from another race or culture, then we eventually wanted to adopt two children from that same race or culture so that they each would grow up with a sibling who looked like them, and who joined our family through similar sets of circumstances.

Of course it all turned out slightly different than we planned at that point, because instead of having two children through adoption, we ultimately decided to have three! And then, for us, our family felt complete. 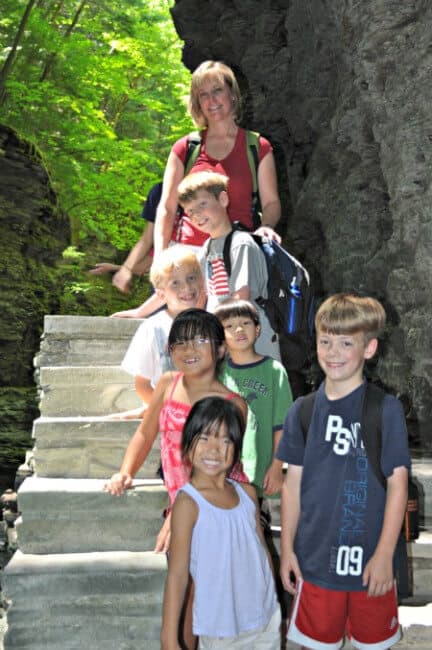 The decision to have kids or not, how many kids to have, and whether or not you still want more… These are all decisions of both the heart and the head. To those who question why someone would want to adopt a child that is not “their own” (a phrase that I passionately despise), I say:

Think about it. You fell in love with your spouse/significant other—and love them so very deeply—yet they are not of your blood.

It is the same with a child. Biology really has nothing to do with it. It is the love, the bond, and the life-long commitment between a parent and a child.

This is how we became a family. And I know just how blessed I am.

Sharon Rowley is a mom of six kids and she shares her passion for helping other busy moms get organized, prepare meals that their kids will actually eat, and celebrate all of the good stuff—like holidays, birthdays, and family vacations—at momof6.com!