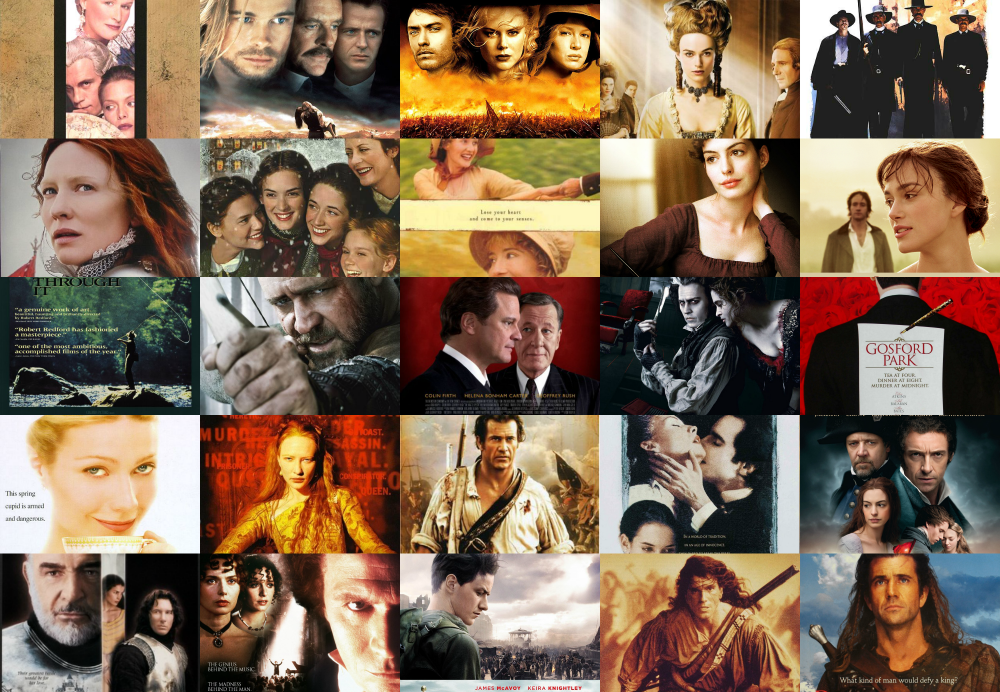 I think my love of period dramas started when I was in elementary school and stumbled upon Little House in the Big Woods, Little House on the Prairie, and all the other books in that Laura Ingalls Wilder series.

Oh, to wear calico printed dresses, lace-brimmed bonnets, and to eat maple syrup “candy” made with freshly fallen snow! I devoured those novels.

From a modern elementary schooler’s perspective, living in the 18th and 19th centuries had to be a very whimsical life!

And naively, notions like no indoor plumbing, once a month baths, and the fact that women weren’t actually regarded as…well…equal humans, never even occurred to me.

I was still an avid reader in my teen years, but also discovered something equally as mesmerizing: MOVIES about period dramas. Today, this adoration has spilled over into addicting TV series like Downton Abbey* and, I suppose, Game of Thrones.

But, I still love a good historical flick, too.

Especially when I can stream the movie right to my computer (or television) via Netflix and Amazon Instant Video—bonus for movies available Prime Instant Video!

SO. If you’re looking for a set of period dramas to whisk you way to another time, this list is for you. Some will make you cry, others will make you laugh, and the rest might make you smile and get all misty-eyed at the same time.

Go grab a hot cup of tea and some shortbread biscuits (okay, maybe a crisp glass of Sauvignon Blanc and a melty wedge of Brie instead), along with your favorite blanket, and curl up on the couch to enjoy each one!

2. Pride & Prejudice
The story is based on Jane Austen’s novel about five sisters – Jane, Elizabeth, Mary, Kitty and Lydia Bennet – in Georgian England. Their lives are turned upside down when a wealthy young man (Mr. Bingley) and his best friend (Mr. Darcy) arrive in their neighborhood.

3. Immortal Beloved
Gary Oldman stars in this tale of a man of genius, a woman of passion and the mystery of a lifetime. The untold story of Ludwig van Beethoven.

4. Emma
This delightfully fun and lighthearted comedy is based on Jane Austen’s classic novel. Dazzling Gweneth Paltrow shines as Emma — a mischievous young beauty who sets up her single friends. Funny thing is…she’s not very good at it! So when Emma tries to find a man for Harriet, she makes a hilariously tangled mess of everyone’s lives.

6. Elizabeth: The Golden Age
Cate Blanchett and Geoffrey Rush star in this thrilling tale of a queen’s crusade to control her love, destroy her enemies and secure her position as a beloved icon of the western world.

7. Little Women*
Winona Ryder lights up the screen in this classic story of love and family devotion.

8. Legends of the Fall
A passionate journey into the darkest secrets of love, betrayal, and the unbreakable bonds of blood, LEGENDS OF THE FALL is a powerful story about three brothers struggling to stay together and the woman who comes between them.

9. The Patriot*
A reluctant South Carolina farmer (Mel Gibson) is forced to fight the British in this epic adventure of the American Revolution. Directed by Roland Emmerich (Independence Day). Screenplay by Robert Rodat (Saving Private Ryan).

10. Dangerous Liaisons
A powerful study of seduction, betrayal and sexual gamesmanship set among the French aristocracy prior to the French Revolution.

12. Tombstone
Wyatt Earp and Doc Holliday team up at the O.K. Corral.

13. Gosford Park
As a hunting party gathers at the country estate, no one is aware that before the weekend is over, someone will be murdered twice! The police are baffled but the all seeing, all hearing servants know that almost everyone had a motive.

14. The Duchess*
A chronicle of the life of 18th century aristocrat Georgiana, Duchess of Devonshire, who was reviled for her extravagant political and personal life.


15. Atonement
Nominated for 7 Academy Awards, including Best Picture, this stunning epic love story stars Keira Knightley and James McAvoy and is hailed by critics as “a ravishing romance.”

16. Becoming Jane
Meet twentyish Jane Austen: in love…and on a path that would lead her to Pride and Prejudice. Anne Hathaway plays romantic, observant Jane in a cinematic imagining of her life.

17. Sense and Sensibility*
Emma Thompson stars in the captivating romance based on Jane Austen’s classic novel of two sisters’ search for love in strict Victorian society.

18. Robin Hood
A thrilling action adventure with Russell Crowe and Ridley Scott at “their most entertaining since Gladiator.”

19. Les Miserables
Hugh Jackman, Oscar-winner Russell Crowe and Anne Hathaway star in the critically acclaimed adaptation of the epic musical phenomenon that is a timeless testament to the human spirit.

20. First Knight
A new vision of Camelot, filled with breathtaking battles, heart-pounding courage and love that brought a kingdom to its knees. Starring Sean Connery and Richard Gere.

21. The Last of the Mohicans
An epic adventure and passionate romance unfold against the panorama of a frontier wilderness ravaged by war.

22. Cold Mountain
At the dawn of the civil war, the men of Cold Mountain, North Carolina, rush to join the confederate army. Ada (Kidman) has vowed to wait for Inman (Law), but as the war drags on and letters go unanswered, she must find the will to survive. At war’s end, hearts will be dashed, dreams fulfilled and the strength of human spirit tested…but not broken!

23. A River Runs Through It
Craig Sheffer and Brad Pitt star as two brothers who rebel against their stern father and become men in the majesty of the Montana wilderness.

25. The King’s Speech
Winner of four Oscars(R) including “Best Picture” and “Best Actor,” The King’s Speech is based on the true story of King George VI’s quest to find his voice. Starring Colin Firth, Geoffrey Rush, and Helena Bonham Carter.

26. The Age of Innocence
Daniel Day-Lewis and Michelle Pfeiffer star in a ravishing romance about three wealthy New Yorkers caught in a tragic love triangle.